This past week we saw Leo slow down a lot. He was sleeping more and more, but kittens are supposed to sleep a lot and I chalked it up to him finally feeling safe around the other cats and comfortable in his new home.
Then he got picky about his food. At first he just wouldn't eat the hearts. Okay. Then he stopped finishing his meat. Then he got to the point where he would only eat kibble and even then it was in very small amounts.
On top of all this, he wasn't playful at all. No more chasing mice, no more exploring, no more shenanigans.
I was also concerned with how his belly was poochy while the rest of him was super, super skinny.
I called the vet first thing yesterday and they scheduled us for today. I took him in by myself. I was expecting that the cold he'd had had moved to his chest and was expecting them to confirm that and give us some antibiotics.
Instead, I was given the devastating news that he has FIP which has no cure.
The vet said that she could give him a bunch of stuff to give him another week or so, but I knew right away we needed to let him go as soon as possible. He was so, so tiny, for starters. Also, I could tell that he is very advanced, but not yet to the point where he's in pain, no longer able to urinate, or having neurological issues. So we've scheduled to put him down tomorrow morning.
I had to text the bad news to Ben and the boys so that we could decide to schedule the appt. I hate that they had to find out that way.
So tonight we're soaking up all the time we can with our sweet guy. We're crying and just giving him the best night that we can. 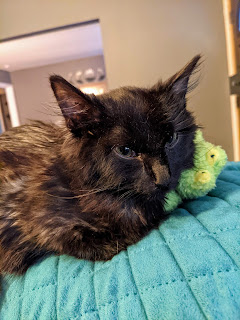 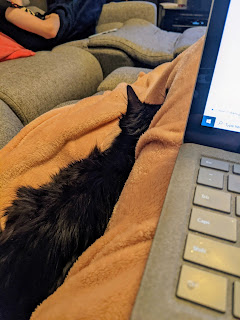