As I was making up a batch of laundry detergent, I realized it's been a good long while since I've posted about it so I though an update was in order.

I've been making laundry detergent for longer than 9 years. For the first few years I was making a liquid detergent that was a big hassle. It was very similar to this detergent in ingredients, but required adding distilled water which is something I never buy otherwise. Then I found this dry recipe and I've never looked back.

Pros: It works well. The soap is super, super inexpensive.

Cons: It is yet another thing that I have to make. Shredding the bar of soap is HARD work using a grater. Thankfully, my brother gifted me a cheese grater attachment for my stand mixer so I now use that. It's still slow going, though!

The washing soda and borax have a tendency to clump over time so you have to bang it around/chisel it out and then grind out the clumps.

So, my take is that it is totally worth doing if you really need to save money and don't mind the elbow grease it takes. I'll continue doing it because I make so many other things, what's one more? Oh, and because I have about a 10 year supply of all of the necessary components. So....yeah.

At least it looks prettier than a bottle of Tide. 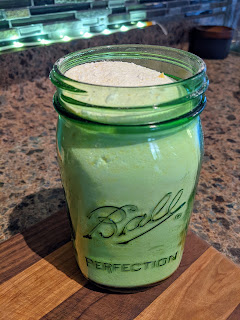