I guess I'm in a before and after type of mood because here's another then and now post. This time I'm writing about my side yard or garden. This has been the project of all outdoor projects. It has been slooooow going.

So, back when we first moved in, this whole area was nothing but grass. Our house is built into a slope so the yard slopes down back to the driveway. There was no landscaping to speak of. It was pretty bleak. We put in some raised beds down closer to the driveway and they were there until we decided to add on to the house.

The bulk of the wear and tear on the yard happened in that area of our yard. We pretty much doubled our square footage by building out that way. We added a garage and then built on top of it. After that, we had the entire house resided. After it was all said and done, the yard on that side of the house was nothing but a rocky mud pit.

And I had thought it looked bad before!

Since we were forced to start from scratch, I decided that I didn't want just grass over there. I'm not a huge fan of grass lawns to begin with and I think that they tend to be really boring. I had grand ideas of a huge garden and started to work on realizing my vision.

The grade of the yard made this close to impossible. Every rain would wash away topsoil and expose ugly rock. There was absolutely no way to get anything to grow because there was no good soil. Ben did what he could with some retaining walls, but it still wasn't enough to combat the effects of the water.

The next step of our plan involved adding sod. I had to give in and throw down a large strip of sod so that the topsoil wouldn't erode. I was pretty frustrated by that decision, but we were exhausted at this point. So we added a hefty chunk of sod at the top. The I laid weed barrier at the bottom and covered it with rock. This is where we landed:

Since this picture, I've been continuing to add planters in the bed. All of the rectangular planters in front have been replaced by composite planters built by Ben. The old ones broke down from dry rot.

I have a lot more plants in the upper section, too. There are a lot of nice plants, but also a good bit of ground cover which has been my aim from the beginning. Creeping Jenny, thyme, succulents, and clover are slowly taking over so that my need for much is reduced and the soil is nourished. 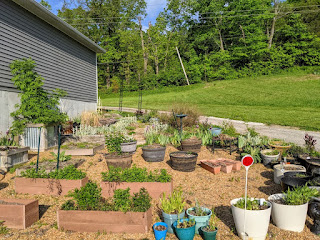 I'm proud to say that I have not invested much money in this project. I do my best to buy things used or on clearance. Pots and plants. It could be a real drain on the budget otherwise!

The biggest frustration remaining is the slope. Always the slope. I put weed barrier down and then gravel on top, but rains continue to wash the dirt down, under the rocks which give weeds just enough to grow in. Also, the gravel gets washed onto the driveway with every heavy rain. I'm hoping this issue lessens as more plants take hold up top.

My goal for this area is to keep adding large planters. It may not look there's room left, but I assure you there is. I could probably fit 5/6 large round planters in there still. And I would have if they hadn't suddenly gone out of stock everywhere. I'll continue adding planters and then large stepping stones to help smother out the weeds. We also need another scoop of gravel so maybe we can do that this spring/summer.

So that's my 6-years-in-the-making side project (HA "side" project). I'm not done, yet, but I'm finally feeling like there's a light at the end of this tunnel. I have so many other areas of the yard that need my attention!