If you're tired of garden updates it's probably best to sit this one out. What can I say? This is my life these days.

I explained the timeline of our home addition and the havoc it wreaked on that side of the yard. Well the side garden wasn't the only thing that has challenged me - the landscaping in front of the addition has been a pain, too.

I knew I wanted flower beds in front of the addition, but there are a couple of challenges. We pretty much doubled the width of our house. That's no small space to fill which means a lot of work and a lot of money for plants. The other issue was that the left-most section is pretty much full sun, but as you get closer to the center of the house it's more like partial sun. This makes symmetry a real chore.

When we added flower boxes last year I felt like they went a long way in adding character and filling in some of the boring space. I had purchased a few things and was given several things and the space was on it's way to looking like something was happening.

Then the pipe broke. I wrote about that earlier this year. The pipe that runs from the well house outside to the pump inside busted and had to be dug out and replaced. That left us with this mess: 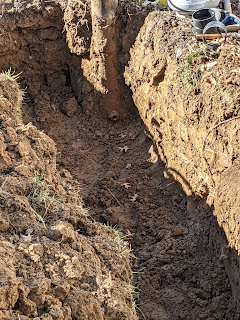 I felt like crying.
After it was all put back together, it left a huge rocky, muddy mess. I had moved a few plants but there were some that were too big to dig out by hand so they were just destroyed. So, so sad.
I decided that it was the chance I needed for a fresh start. I sat down and sketched out an idea and did research on plants that were tolerant of sun and part-sun conditions. My list was made and as soon as the cold snap passed I set to work locating the plants and getting them in the ground. I don't mind using gifted plants or transplants to fill in some of the areas, but I decided it was worthwhile to plunk down the money to get some of the right things in so that real progress could be made on this bed. After all, it has been 6 years and it's been pretty haphazard in this area the entire time.
After several trips to a local nursery and a trip to Lowe's, here's where I'm at now: 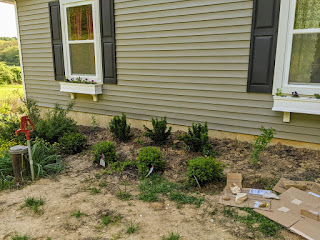 This looks underwhelming now since everything is small, but it should take off over the next year or so. The three evergreens in back will grow up to be about 6-8'. They'll fill in that space between the windows nicely. In front of the evergreens are 4 staggered azaleas. The spindly thing on the right is a start from the spirea that you can see on the far left. I've also interspersed some large phlox between the larger plants and I transplanted some ground cover, too. I've added a few things to the far right, outside of the frame, but that's for another post.
The next part of my project is to clean up the area in front of the plants. That will be my focus when we get home. The boxes with rocks on top are my redneck way of killing of the odd strip of grass that's still clinging to life there. I'll be adding a stone border and then throwing down some sod in front of that to green up that area again. I'll add in some fresh mulch and then probably won't do anything until Fall when I'll probably fill in some gaps with transplants or clearance plants.
So that's the update for now. I'm looking forward to posting a nice update picture in a couple of months.