This front left landscaping has been a real thorn in my side. I wouldn't have guessed it if I'd been asked that first year we moved in. Then it looked like this: 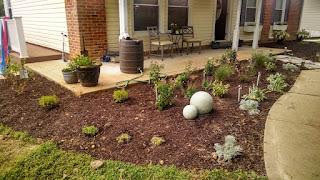 Not bad, right?! We'd hired someone to dig up the grass there and I went out and spent money on those plants and lights and decor. Ta da! It all came together and it was on to other things. Right? Wrong.
Not long after this we found out we needed extensive repairs to our basement. From the inside and out. So that meant digging up every. single. plant you see before you and busting up the porch so that a deep, man-sized trench could be dug and tar painted on the outside of the basement. I had no choice but to put the plants in heaps and pray that they would survive until I could get them back in the ground.
I think it was about two weeks before all of the work was completed and the porch and new sidewalk were poured. The whole area was a wreck and the new bed ended up being smaller. I did the best I could and some things survived and some didn't.
It was only a couple of years later that we decided to build on to the house and then reroof and re-side. There were SO many men and machines in and out that there was more destruction and heartache. I was tired of buying and planting things only to have them destroyed!
Here's where we're at now: 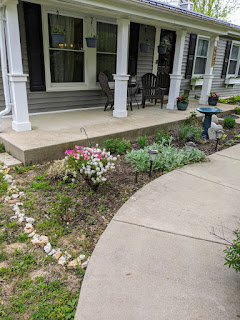 My goal for this year is to get some ground cover plants going in this bed, freshen up the mulch. And add a couple of small perennials here and there to fill in some gaps. Oh, and I want to either build up that rock border or replace it with something else.
So, work has definitely been done, but I'm not sure if I can accurately say that progress has been made. It may actually look less finished now than it did 9 years ago. We'll see how much I can accomplish here in the next few months, but hopefully be able to share a good update in the Fall.