The snow is gone and it's sufficiently warm enough to really get excited about my plants. I started with making the most out of what I already have since several of my plants have grown enough to be divided and transplanted.

Several hostas were large enough to be divided and scattered around the yard. They're looking pretty good so far this year. This is to the right of the front door as you're looking at the house. 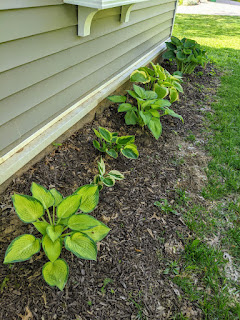 These peonies are an experiment. After the burst pipe incident when that flower bed was torn apart, I decided enough was enough and I was going to just start over. The first order of business was to dig out both peony plants, but I wasn't sure how they'd react or if they'd even survive. Then when Luke dug them out for me he butchered them and I thought for sure that was the end. They ended up dividing up sort of on their own so I thought I'd run with it and transplant them in various spots around the yard. So far they're thriving so go figure! 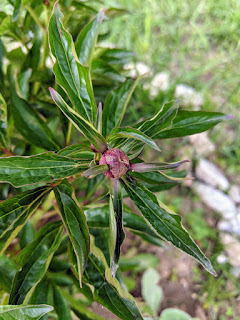 I've transplanted many, many other things, but most aren't really anything to look at. Yet.