I don't know what was going through the heads of those who breached the Capitol today. I'm really not sure what they thought to accomplish. It didn't work.
The aftermath and commentary from the other side was just as disheartening and telling. You'd think entire city blocks had been burned. Or monuments and statues toppled. Or businesses destroyed. Or entire sections of cities taken over and declared as autonomous zones. Or businesses sacked and looted. Over and over and over, for months on end. Oh, wait....
Today, a minority of hotheads acted rashly and will now face the full penalty of the law. As they should. Some even lost their lives for their folly. But, the other side showed their true colors in how they responded. All of the president-elect's calls for "unity" are seen for what they are. There are clearly two sets of rules as well as a glaring absence of justice and accountability. The way they will handle things and what they will tolerate and what they won't, has been clearly exposed. Unity implies concessions will be made on both sides. Compliance demands something it never intends to reciprocate.
I'm glad we had the chance to visit D.C. when we did, back in 2018. It was beautiful and peaceful then. At least it was under the under the facade. Maybe one day true peace will be restored. 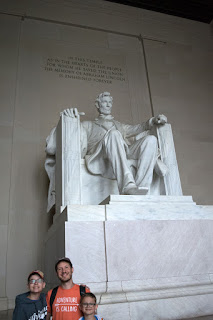