We didn't rush to get out the door because we knew we'd want to have enough energy to get us through the day to the evening show. Most of the Disney parks have some kind of night time show, but this one is our favorite. The castle itself is the back drop that the lights are projected onto. Beautiful!

The park was packed! It was a Sunday, after all. We were naive, thinking that because it was off-season it wouldn't be too bad. Hahahahaha. The crowds weren't suffocating, and we got to see and do quite a bit, but not as much as in previous trips.

In Tomorrowland, we watched the Monster's Inc Laugh Floor show which is a family favorite. It's interactive and unique every time. Gabe and I rode the Buzz Lightyear's Space Ranger Spin. Not a particular favorite, but Gabe had read some tips and tricks on how to get the ultimate high score. We didn't reach it, but we were both pretty impressed by the scores we did get.

Next was Fantasyland where we rode It's a Small World. Yes, it's cheesy, and hokey, and that song gets stuck in your head for days, but it's a CLASSIC. The boys don't even argue too much anymore, they just know it's a given.

We hopped over to Frontierland where we ate lunch at Pecos Bill's and then watched Ben's favorite show, the Country Bear Jubilee. I still don't know for sure if he truly likes the show or likes subjecting us to it. I may never know.

In Liberty Square, the boys and I stood in line for the Haunted Mansion. Ben was starting to wear down at this point so he went back to the car and napped for a while. We made it through the long wait and then the ride on our own. It's also a Magic Kingdom classic, but one we all enjoy.

We had some time before our next FastPass so the boys and I climbed through the Swiss Family Robinson Treehouse, got some popcorn, and then headed over to the Hall of Presidents.

There was a heckler sitting right behind us which made the entire experience more memorable for sure. He was obviously anti-Trump and made his views known by guffawing at one point and then outright LOUDLY and obnoxiously laughing at another. He wasn't just someone who happened to be a loud laugher, he was clearly making a point. I turned around and gave him a look. His behavior created an air of tension that you just don't expect to feel in that type of environment. Thankfully, when the Donald Trump animatronic finished giving his speech, the whole room exploded in applause. Take that Mr. Obnoxious Liberal.

Ben caught back up to us and we rode the Pirates of the Caribbean, which I always enjoy.We grabbed some treats at Sleepy Hollow snack shop and then Ben and the older boys rode Big Thunder Railroad. Gabe and I headed to Main Street so he could search out an antique prop phone he'd read about that plays a recording.

We didn't have time to meet back up with our crew before the finale started so we watched that separately. We'd planned to ride Space Mountain right after, hoping the line would be short, but that didn't work out. It was a 90+ wait all day. Poo.

After browsing some shops along Main Street, the park was closing so we had to head back. I was surprised at how quickly the day had flown by and how relatively little we'd been able to see and do, but we'll know for next time! 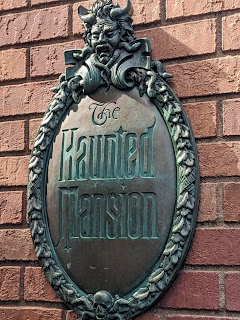 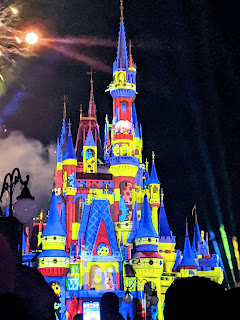