Hollywood Studios was never our favorite park, but the addition of Galaxy's Edge has moved it up to second place! We are a Star Wars-loving family and have been excited about this new development since it was first announced.

We got up early, payed for priority parking, and rushed to the entrance. The latest ride, Rise of the Resistance, is extremely difficult to get into and you can't get in the virtual queue until everyone in your party is in the park. Despite our best efforts, we were still placed in the VERY LAST boarding party with no guarantees that we'd make it on the ride at all. Womp womp.

Oh well. We wanted to get onto the Rockin' Rollercoaster first thing so we didn't have time to mope about. After that ride, Ben and the older boys rode the Tower of Terror while Gabe and I stood in line to get his picture with BB8. All our years going to Disney and this was the first - and maybe only - character pics!

Next, we met up to watch a live Star Wars themed show. Clips from all of the movies were shown on big screens and various characters took the stage. By the time it was over we were really pumped for Galaxy's Edge.

There was so much to take in and see everywhere we looked. We wandered around just taking it all in and then grabbed lunch at Ronto Roasters. The wait for Smuggler's Run was a bit long, but it was worth every moment!

We then took a break from Galaxy's Edge so we could go and watch the Muppets 3D show. After the show, we were all hot and tired. Gabe and Kaden wanted to build lightsabers so we did that. After wondering around a bit, we found a little nook where we could sit in the shade AND charge our phones. The boys were happy to have a place where they could swing their sabers around without getting scolded.

As it turned out, we were sitting where the Incredibles characters came out for meet and greets. There were't many people around so we got to interact with them a bit, which was really fun! Ben and the boys then decided to ride the Star Tours ride, but I was feeling woozy and decided to just sit that one out and rest. Apparently it was a big hit with them and I really missed out. 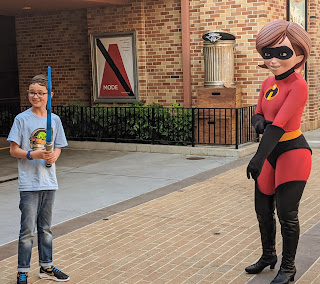 We grabbed snacks for the boys and then watched the Indiana Jones stunt show. We see it every time we go and always enjoy it. All of our FastPasses were used by that time so we headed back to Galaxy's Edge and tried the popcorn and the green and blue milk. We wandered around for a bit, taking it all in and hoping we'd be called up for the Rise of the Resistance ride.

As it got closer to closing, we received a notification that we would not be able to ride Rise of the Resistance. We were bummed because we'd gotten SO close, only to have the ride experience technical difficulties. Since we were all hungry again, we grabbed dinner and then had plenty of time to settle in for the evening finale.

We'd had a very full and very fun day. Galaxy's Edge was jaw-dropping and they seem to have plenty of space to expand so we'll be looking forward to what they add in the future. Though tired and sore, it was starting to sink in that our vacation was coming to an end. The sun and freedom to be outdoors would be over before we knew it and we'd be back to reality!