We've been spoiled by so many beautiful days. It really helped us ease into the idea of spending time outside every day. But now our resolve will be put to the test!

The boys put up a fight at first, but I didn't listen. I encouraged them to bundle up well and that we'd be fine. So they did and they were.

Luke and I started out with a hike along the "river" that runs between our property and Karen's. We observed an interesting seed pod and then splashed our way down to the creek in back.


We walked up and down the creek trying to find a place to cross over, but there wasn't one to be found. The banks have eroded in the past 8 years and it's really deep in some places. That didn't stop Luke from trying and then getting water in his boots. 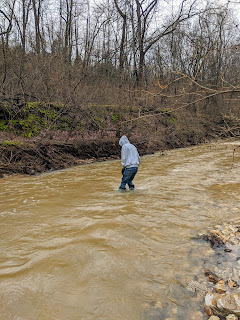 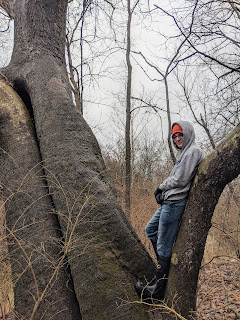 After a bit, he headed back to the house to change while Gabe met up with me and I showed him all of the same sights. We also poked around the swollen pond and then explored Karen's property a bit. We were entranced by the way the vines had grown around the barbed wire and Gabe liked the neighbor's flag which prompted a discussion on flags and their meaning and importance.

Once back a the house, Luke came out to meet us and suggested a game of bucketball. Bucketball is like basketball, but for vertically-challenged people who are too cheap to buy a basketball hoop.

I got a ball in the bucket in short order and was pretty proud of myself. Gabe complained that his bulky gloves would keep him from handling the ball well and then proceeded to sink the ball on his very first try! Luke spend 40 minutes trying desperately to sink the ball, but finally succeeded so we could call it a day. 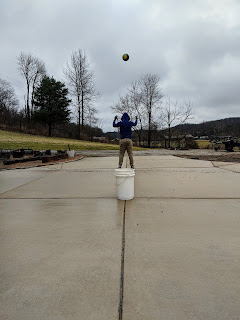 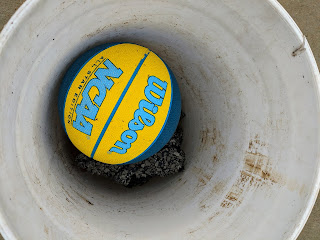