I've mentioned previously on my blog how difficult it can be to make and sustain friends as an adult with kids. It certainly doesn't help that we've moved and changed churches several times over the years. I've seen, all too often, how friendships fade when we don't have the forced interaction of multiple church functions and homeschool get-togethers to spur us on and maintain the connection.

I get it. I've never taken it personally because this stage of life is busy in a never-in-one-place sort of way that you don't deal with when you don't have kids or when you have little kids. And I've had a lot of people in my life who can't really be counted on to be there. I've learned that it's often about them and their issues and what they're dealing with and it's not personal. I've learned to extend grace. The problem is that I became too complacent of that friendship fade and accepted it as absolute fact. I forgot that I had a choice in the matter and that I could fight for my friendships.

Thank God for a friend who models that type of fight for me. Erica isn't an in-your-face sort of fighter, she's more of a I'm-going-to-hang-on-with-an-iron-grip sort of fighter. That sort of tenacity takes a lot of courage because you put yourself out there and hope for the best and you could still get stranded. She keeps taking the risk.

I haven't been deserving of her tenacity, but I'm resolved to be better. To make more of an effort. Because that's what she's modeled for me and that's the type of friend - the type of person - that I want to be. Sure, "just show up" is a great and can lead to a lot of wonderful things, but sometimes it's not the showing up that's the hard part, it's the sticking around. 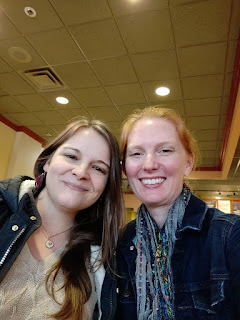