Chelsea, Nate, and Isla visited us recently and it was a blast!

They were in town for a family wedding so their time was pretty divided, but we got to see them twice. The first time was just hanging out at our house.

Isla is so entertaining that she end up being the center of attention the entire time. She is so hilarious! She was obsessed with trying to hug the cats and loved playing with the boys' toys. 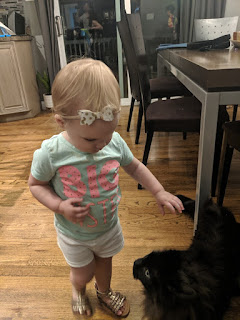 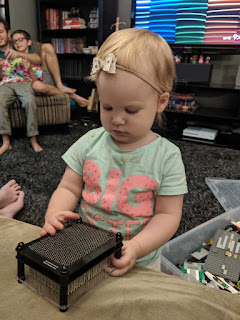 I don't know if you can make out here shirt, but Mommy and Daddy were hiding a big surprise! Isla is going to be a sister in just 8 weeks! Another little girl is on her way.

We were all pretty stunned that they could keep it a secret for so long, but they have known for a while that they're coming up and they wanted to surprise everyone.

A couple of days after this visit, we hosted a family get together.


We had such a nice time. Isla is such a doll. I hate that we don't get to see her and her parents more often.

I now have two pregnant sisters! Chelsea is due in October and Anna is due March 10th. Our family is growing! <3