Ben's birthday was a lot of fun. It wasn't a milestone birthday so we didn't do anything major and we don't buy each other gifts anymore, but it was nice nonetheless.

The day of his birthday started out with a lot of running around. There was a huge event at church and our coffee filters were totally missing. No one knew why or how, but they were gone and we needed some more. It turns out that they are a size that can be found easily online, but there's not a store around that has them in stock.

I called the one restaurant supply store in the area that sells to the general public and they assured me they had plenty - 40 cases! So we drove 30 minutes....only to find that they were not the size I'd specified. So frustrating.

We dropped by a new, local, coffee shop while we were there. 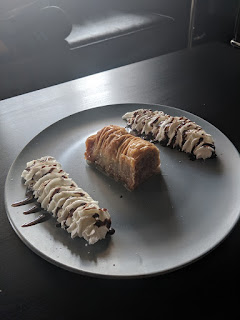 The menu was very limited. But this baklava (?) was pretty tasty and I enjoyed my latte.

After so much running around we decided to save dinner for another day and went in search of dessert. I found that Sugarfire has a pie shop so we decided to try it out. I've never seen the boys move so fast!

I grabbed a slice of cherry pie, Ben chose the cobbler topped with vanilla ice cream, Gabe chose a whoopie pie, and Luke had a key lime pie shake. YUM!

The retro decor was neat, too! 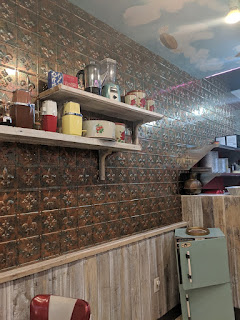 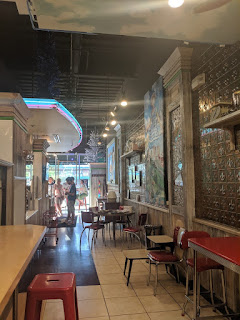 After pie, we decided to stop by a game store called Miniatures Market. They were having a huge sale! We were there for a good 30 minutes browsing the games and ended up coming home with SEVEN. It was fun to see the boys get excited about the games. They both got to pick one out.

The next day, after church, Jacob came to hang out and we easily convinced him to eat dinner with us. We tried a new restaurant, The Block. It's very pork-centric which suits Ben perfectly. Everything was amazing. 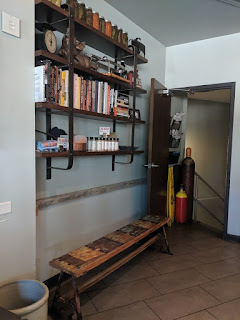 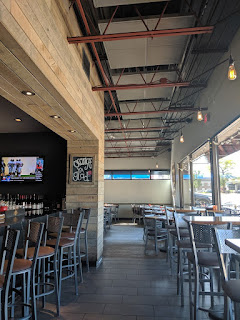 My favorite part of the meal was the brussel sprouts. They were SO good. Even the boys raved about them!

So that was Ben's birthday. It was full of good food and games and coffee which is pretty much a perfect day for him!