He is Our Peace

Several weeks ago an artist friend whipped this up and when I complimented her on it she gave it to me. I liked it so much I stuck it on my mirror. 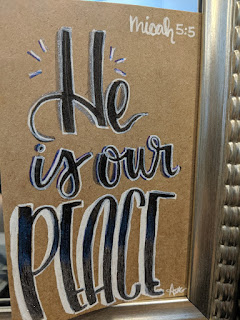 Shortly after that, I came upon a quote that stood out to me so much that I wrote it on an index card and placed it on the opposite corner of the same mirror. 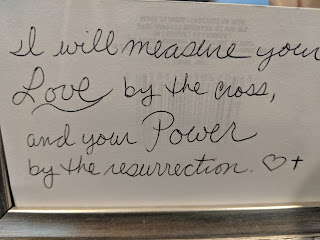 God always knows what we need before we do. We want him to prove his love and power by doing things the way we think he should, but that's not the way it works.

Last night, after the boys were in bed, Ben and I had a little sobfest over this whole thing. We're both pretty logical and reasonable people who try not to let emotion get the worst of us. But it hit us both at the same time.

While we can see improvements in Luke, we're also struck by how weak, exhausted, and spacey he's been lately. He hasn't touched an instrument since he's been sick. He hasn't argued with us about anything. He hasn't worn a hat or a hoodie. These are such small things and may seem silly, but they are so much of who he is; an energetic, passionate, musical, hat and hoodie-wearing teen. Not this worn out shell.

Seeing Ben upset and crying was both good and hard for me. Good because I've noticed these things and grieved over them, but only a little. I was dismissive to my feelings. Hard because, after 20 years of marriage, I've only seen Ben cry maybe twice before.

We gave ourselves about 30 minutes to think the worst and cry ourselves out. Then we prayed and sent some late-night texts asking friends for prayer. Once we fell asleep we were out and slept well the rest of the night.

I'm at home typing this as Ben is sitting with Luke at the imaging center. He says Luke is in good spirits and is doing great. Because of the weekend, we're not expecting to hear from the Dr until Monday or Tuesday of next week.

We'll spend the weekend continuing to let him rest, keeping up with getting him fed, and praying over him as much as possible.