When we purchased this house, almost 9 years ago, the previous owners had done some things really well, had left some things totally untouched, and some were a weird mismatch. The hall bath fell into that third category.

The previous owners where an engaged couple that broke up. They'd done a lot of good work up until that point, but once they decided to call it quits and just sell the house, they were less motivated to keep up the good work and the bathroom showed that sentiment.

Everything was new, but it was an odd mishmash of random finishes and styles. But, it WAS all new so we couldn't really justify changing anything up. Until recently.

The bathroom cabinet started to leak and the door broke, to boot. We actually let it go for several months, but as vacation came nearer I didn't want to leave with a water issue and have something go really wrong while we were so far away.

So we took a week and redid the bathroom.


The wall paint was chipped and the shelves over the toilet were super cheapo things I'd picked up at Target when we first moved in. We forgot to take them out of the bathroom when we had the bathtub redone, so they had some overspray on them giving them a perpetual "I haven't dusted in 2 months" look.

I painted the bathroom a colonial blue, we added a new sink and a new shelf that I found at TJ Maxx. I swapped out the shower curtain for the one in the master bath. 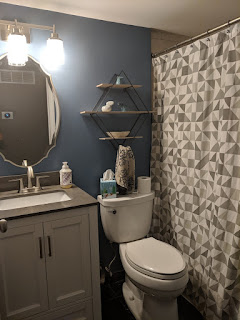 I like that it's lighter in there now. The old sink cabinet was black and that, along with the black floor and black shower curtain, was a lot of black.  Now it's so much brighter!