It's been a long time since I've posted on this blog page. I've missed it, but I've been busy adding content to my other blog, The Wandering Homeschooler.

Also, this Winter was a chore to get through. Which I feel ashamed to say that because we had such a nice winter break down in sunny Florida. But, the truth is that allll the cold and grey got to me a bit this year.

So, even though it's April, I think I'll do a brief March update.

We saw Lauren Daigle in concert. She was wonderful. Wow, her voice is so strong.

My 39th birthday was so special. Ben went all out and everyone was so sweet to me. Among other things, he gave me this sweet cat pin to add to my collection because he knows how much I love our black cats. 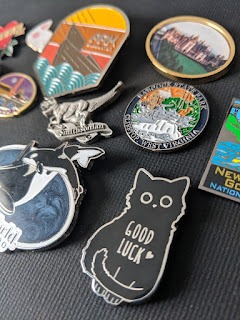 We're doing really well in school and with co-op. The boys and I are really enjoying getting know some new people. Luke can never have enough friends so it's been good for him. Gabe has been stretching himself a bit and doing really well.