After breakfast at the hotel, we headed straight over to Fritz's Family Fun Adventure.

We had such a blast here running, climbing, and exploring. The underground tunnels gave me a moment of sheer panic, but otherwise we all had a great time! 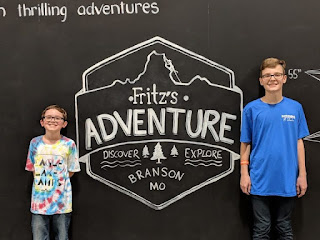 Ben and Luke scaled this wall pretty easily. Both were able to make it to the top in good time. I'm fairly certain Ben is part mountain goat. Luke did really well, too. He was a bit slower, but he still made it up in good time. 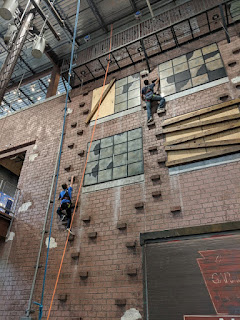 I didn't fare so well. 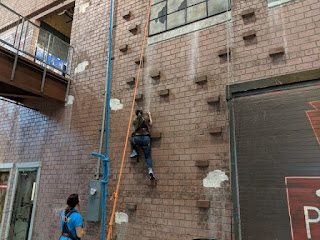 Heights aren't my favorite so I'm not sure why I decided to attempt this right off the bat, but Ben and Luke made it look downright easy. Since I'm shorter, it's more arm work for me and I have very little upper body strength. I got to this point and had to come down. I did end up climbing one of the poles. That still got my heart racing because of the height and sway, but it wasn't too physically challenging. Ben went on to do the even harder course to the right of this picture and he did it well!

We were worn out after a while so we did some shopping at the outlet mall. Then we had lunch and a nap. Our tickets to Fritz's were good for the entire day so we went back once we were refreshed.

We easily spent an hour on the course. It's 4 levels, each one getting higher and increasing in difficulty. As it got later we pretty much had it to ourselves so we were going nonstop. Ben got to a point where he was crossing some of the beams without hanging on and with his eyes closed! Tethered, always, of course, but still!

I was amazed at how Gabe's confidence grew. He eventually just went off and did his own thing and went on the zipline portion several times. I was so proud of him. He doesn't like heights at all and he's small and weak for his age. It was an enormous challenge for him.

Finally we were exhausted. Too tired to even eat, we headed back to the hotel to watch TV and relax before bedtime. It had been such a fun and challenging day! 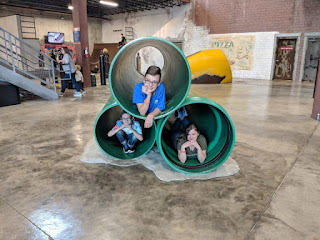