I've been wanting to watch Captain Fantastic since I first viewed the trailer. 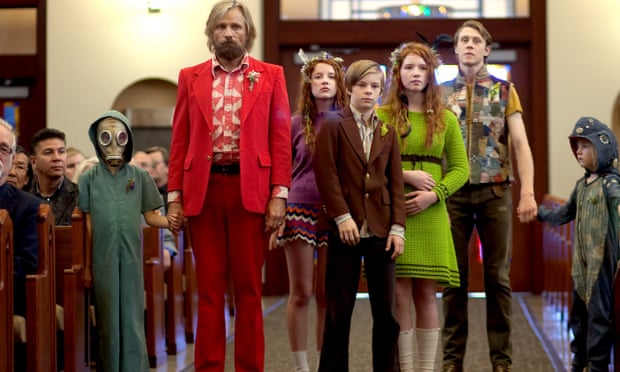 It features a homeschooling family that lives out in the wilderness. Instead of video games and tv, the kids spend their days gardening, hunting, rock climbing, playing music, and reading literature. When they do travel it's done in style: a converted school bus named Steve.

There were things to like about this movie. For instance, I love how the dad tells his kids the truth about things. He's frank and honest with them even when it makes the viewers squirm.

I like how the kids hunt and know how to field dress a deer and yet they are non-violent. Meanwhile, their cousins are the typical suburban-raised kids who would be appalled at the blood and gore of hunting, dressing, and preparing their own food, but spend hours playing violent video games.  It's the juxtaposition of those types of things that really stood out to me in the movie and I loved it.

The downside: the hippie kids are very liberal. At one point, in a letter from the mom, she praises how they are raising their little "philosopher kings" and their "republic." Both of these things refer to Plato's Republic and if you've never read it it's DISGUSTING. (Every dictator the world has ever seen can trace their thought process back to the Republic. It reads like every dystopian book you've ever read.) I'm no friend of government, but it kills me when people bash the government we have in favor of socialist regimes. (I mean, have you ever read a history book. Those types of governments never end well and are pure hell for all but the reigning elite who are running things.) But I digress.

Homeschooling. The oldest son applies and gets into every top university in the country. And yet throughout the entire movie everyone tells the dad that obviously the kids NEED to be in "real" school. Even though the kids are more well-read than most college-educated adults. Even though the 8-year-old schools her older cousins on the Bill of Rights. So at the end of the movie, you see the dad packing lunches and reminding the kids that the bus will be arriving in 15 minutes. Sigh.

(This, to me, points out the fact that so many people dislike homeschooling simply because it's "weird." They will try to cover those feelings with concerns about socializing and education, but in the end I honestly believe most people think kids should be in school because it's normal and anything outside of normal makes them squirm.)

Mental health. Argh. This ticked me off. So, the background is that the mom was bi-polar. She ended up going back home at some point so she could get medical treatment. While there, she slit her wrists and killed herself. And yet, throughout the movie, everyone blames the dad (and he ends up blaming himself) for her mental illness persisting. He comes to the conclusion that it was their hippie lifestyle and lack of "real" medical treatment that lead the mom to kill herself. He, and everyone else, believe that she would have survived and thrived if she'd only received medical treatment sooner.

Ooookay. I call bull. This sounded like a last-ditch-effort of Big Pharma shills to push an untrue narrative. Research is showing that mental illness is not some mystery illness. It is directly connected to our gut. That means that our diet and lifestyle directly effect our mental health. When the gut is damaged, the body isn't able to produce serotonin or maintain healthy levels. We know that drugs aren't a good fix for most people with "chemical imbalances" and themselves often lead people to commit suicide. Plus, it was in the care of "real doctors" that she finally succeeded in killing herself...sooo.

Plus, really, really, who in their right minds would argue that being back in "the real world" is somehow less stressful that a peaceful farm in the middle of nowhere?! What in the heck. Our modern society is one of the most stressed societies anywhere ever. What a ridiculous notion.

In the end, this film felt like it was written by someone who had no insight to anything remotely alternative. It was the perspective of so many flat-thinking people and what they imagine a homeschooling, living-off-the-grid type of family to be.

The disappointment is my own, though. I shouldn't have expected so much of a hollywood film. I should have watched it for it's own sake and not gone into it with my own expectations. While I'm glad to have finally seen it, I probably won't ever see it again and I'm not sure I'd really recommend it.